French President Francois Hollande has taken a bold step toward ending the slaughter in Syria by recognizing the newly formed National Coalition for Syrian Revolutionary and Opposition Forces as the sole legitimate authority to govern Syria. As the first Western country to recognize the coalition, France is playing a welcome leadership role in dealing with the crisis. The UK has now also added its support by recognizing the coalition as well, something that the United States has unfortunately not been willing to do. 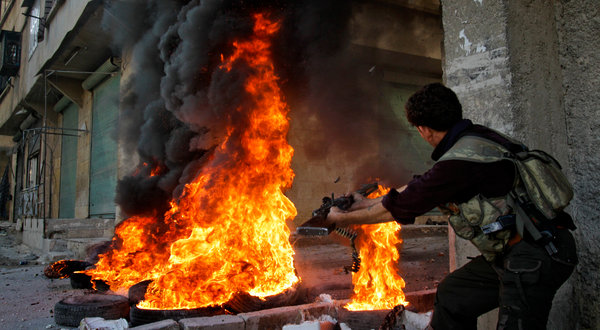 France is also considering providing arms to this newly formed rebel coalition. What is truly remarkable here is that Hollande has decided he is willing to work outside the framework of the United Nations, given how frequently and vocally France has criticized such unilateral moves on the part of the United States.

It is clear now that the UN is powerless to stop the violence in Syria. Russia has not only opposed calls for UN intervention, but is supplying arms and technical support to Assad’s regime. With the Russian Security Council veto on the table, recognizing and arming the newly formed Syrian resistance coalition is the best move forward. None of the Western powers have the political appetite for direct military intervention, but standing idle while thousands of innocent people continue to die is not an acceptable alternative for the conscience of the world when we can give the Syrian people the means to fight for their own freedom.

Some observers have criticized the coalition because it has been rejected by Islamist elements within Syria. However, the best hope for a free Syria is a secular state ruled by moderates, something that such people would never support in the first place. The Islamist rejection of the coalition should serve the West as an endorsement of the new coalition as the best hope for democracy and freedom in Syria. An Islamist state in Syria could be as bad or even worse than the butchery we’ve seen under Assad, and the West should put significant resources in the hands of those who will choose a different path and bring hope to Syria’s future.

Be the first to comment on "Recognizing Syria: Leadership from France"