Friday, February 2nd, 2018 began like any other. The end of another workweek, another week of the tedium of routine normal life; a day for taking care of errands. As I drove to a routine eye appointment, the only thought on my mind was whether I should bother getting new frames with my new prescription or not.

A few minutes later, I realized I had failed a peripheral vision test, and I immediately began to panic. Retinitis pigmentosa (RP) runs in my family; I had been getting retinal scans every year as a precaution, and my assumption had been that since I had no signs of it before 30 that I had dodged this particular genetic bullet. I knew that peripheral vision loss was one of the early signs of RP, and so I feared the worst.

A few minutes after that, I had a full retinal scan which confirmed my worst fears – that like much of my family I was doomed to lose my vision gradually over time. There is no treatment or cure for RP, and I was now facing the inevitable prospect of going blind. I don’t know the rate that my condition will progress. It is possible that I may keep some usable central vision for decades, or I may lose all light perception.

After the initial shock wore off and I confirmed my diagnosis with a retinal specialist, I began investigating what resources were available for someone like me to try to maintain an independent life. I discovered the National Federation of the Blind and read their philosophy. I began to understand that blindness is just one characteristic among many; that my coming blindness does not define who I am; and that with the right training and adjustment that my blindness could be reduced to a nuisance instead of a crippling disability. I learned that I could remain employed and continue to provide for my family if I would be willing to learn the right skills. The NFB helped me get past the initial panic and despair that came when I found out I was going to go blind and get focused on figuring out how to adapt my life for the best possible outcome given my circumstances.

Part of that meant uprooting my family. The town my wife and I had bought a home in is a great place to live in a lot of respects, but like most of Utah is almost completely inaccessible for anyone who isn’t able to drive a car. While my vision wasn’t yet bad enough that the state would revoke my driver’s license, my doctor had expressly forbidden me from driving after dark and told me that I should consider the risks of driving at all. I had had a recent close call where I nearly hit a pedestrian before my diagnosis, and I have seen enough horrible accidents as a former policeman that I simply was not willing to roll the dice on that. I don’t think I could live with the guilt of killing someone because I held onto driving too long, especially knowing that my vision would get worse over time. I gave up driving almost immediately after my diagnosis and traded my car keys for a white cane. We packed up the house and put it on the market so we could move to a location better connected to public transit.

In the meantime, I had a business trip to take to Dublin, Ireland to visit our office there, which would be my first air travel with a white cane. Some visually impaired people are self conscious about using a white cane; they are afraid of “looking blind.” Personally I find tripping and falling or running into “obvious” hazards to be a lot more embarrassing than having a cane in my hand. It ended up being a very good thing I took it with me, as I ended up getting lost in a dark corner of Dublin and my terrible night vision made it a bit more interesting. My cane kept me from getting injured from that experience.

I made it a point to still get out and see a few things while I was there, and so I visited Malahide Castle: 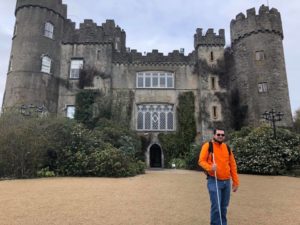 Two months later, my house is sold, my new home is being built in an accessible neighborhood and I find myself packing up my desk at the office and beginning a six month leave of absence to attend full time blind rehabilitation training at the Utah State Office of Rehabilitation, where I will study braille and relearn a ton of basic life skills with non-visual techniques under blindfold. I will learn how to use a computer non-visually so I can continue my work as an IT manager. Most importantly I will learn what I need to learn to remain an engaged, productive and independent member of my community no matter how bad my vision gets. The past few months haven’t been what I expected. But now it’s time for a new adventure.