The Obama administration seems to be finally accepting reality when it comes to Russia. President Obama came into office with the utopian idea that a “reset button” could resolve problematic relations with Russia. But Secretary of State Hillary Clinton on Thursday expressed concerns that Russia is trying to “re-Sovietize” Eastern Europe and Central Asia amid new tactics and laws that criminalize outreach efforts from America in these countries. In her own words:

“There is a move to re-Sovietize the region. It’s not going to be called that. It’s going to be called customs union, it will be called Eurasian Union and all of that. But let’s make no mistake about it. We know what the goal is and we are trying to figure out effective ways to slow down or prevent it…the space for civil society and the protection of human rights and fundamental freedoms is shrinking, and governments are becoming much more aggressive in trying to stifle dissent, prevent the free expression and exchange of views. It’s distressing that 20 years into the post-Soviet era … so many of the hoped-for indicators of progress are retreating. And the impact on individuals and organizations is becoming more oppressive.” 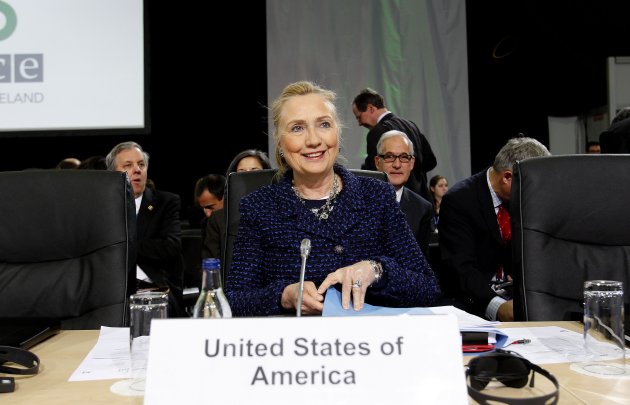 The Obama administration seems to have lost its naïve hopes when it comes to warming relations with Russia, and it’s about time. The bottom line is that Russia’s interests are not our interests. When Russia was taking its first halting steps towards consolidating democratic rule, the Duma (Russia’s parliament) refused to give President Yeltsin what he wanted in 1993. Yeltsin responded by ordering tanks to shell the Duma, and Russian democracy never recovered, getting worse when former KGB agents such as Vladimir Putin came to power. Basic fundamental freedoms are stamped out in the name of “stability,” and electoral fraud is rampant. Some of the “opposition” parties in Russia are actually controlled by the Kremlin and only exist to present the appearance of multiparty democracy in Moscow.

While it is true that Russia cannot project power worldwide the way the Soviet Union could, it is also true that it is determined to reacquire its old sphere of influence. The SVR (Russia’s foreign intelligence service) was instrumental in slowing the pace of reforms in Ukraine and drawing that country back from the brink of EU and NATO membership. President Lukashenko of Belarus, commonly known as “the last dictator of Europe,” would not have been able to stay in power and continue oppressing his people for so long without support from Moscow. And it was only four years ago that Russia invaded Georgia, a former Soviet republic that had been reaching out to NATO, to show the world that America cannot always protect its client states and to effectively end NATO expansion.

It shouldn’t have taken four years for President Obama’s administration to wake up to the troubling reality of Russian domestic and foreign policy, but it is refreshing to finally hear Secretary of State Hillary Clinton call a spade a spade and commit the United States to slowing down and preventing as best we can the slide back towards authoritarianism in the Post-Soviet space. It is in both the national interest of the United States and the common interest of humanity for America to champion the cause of freedom and human rights throughout the world.

1 Comment on "So Much for the Reset Button: Clinton Warns of Re-Sovietization by Russia"