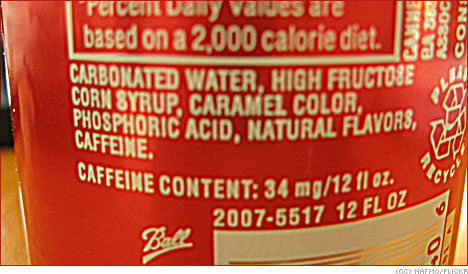 It comes down to our protectionist agricultural policies. The USDA manipulates the domestic price of sugar to double the world price to protect American sugar beet farmers from having to compete on a fair world market. Coca-Cola uses corn syrup instead of sugar in the United States because it costs them less. The USDA uses import quotas to restrict the supply of sugar coming here and inflate the domestic price. Such behavior by private enterprise would be monopolistic and likely illegal, but when the government does it, it’s simply “agricultural policy.” American consumers get stuck paying double the world price because of this interference.

It reflects the fact that American farmers are one of the best organized and most successful special interest groups in our entire political system. Every year farmers receive billions of dollars in corporate welfare from our taxes, despite the fact that most of that aid goes to the biggest and most profitable farms. And in today’s troubling fiscal climate, we can’t afford to write welfare checks for corporate farms.

America claims to be the champion of free trade worldwide, but our agricultural subsidies underline our hypocrisy. We insist other countries open their markets to us, but we keep the door closed on many agricultural products. This hurts many developing countries with a comparative advantage in agriculture and damages their hopes for economic development. By propping up the price of sugar, the USDA helps to keep places like Brazil, Ethiopia and Mozambique impoverished. It also perpetuates the inefficient and expensive production of beet sugar in the United States. If sugar beet farmers can’t produce sugar efficiently, then they should grow something else, not use political influence to cheat the market.

Be the first to comment on "Why is there no sugar in my Coke? Ask the USDA"