Flying across the world is certainly exhausting under the best of circumstances. In my case I was so wound up about leaving that the night before we flew out I only slept about 45 minutes (not an ideal way to start a long trip to be sure). Paul on the other hand was a happy camper almost the entire trip. Here he is enjoying his long layover in DC. We got to sit next to a window where he could see lots of planes, baggage trucks, and fuel trucks running around which kept him occupied for a long time. The only drama we had was when he tried to drink some hot chocolate a little too fast in Germany. He showed that his lungs are still in good working order for a long time after that.

The flight over the Atlantic was pretty boring. Not much to see out the window, unfortunately. We flew over Ireland, the UK, France and Germany all in the dark. I did manage to get one decent shot out my window just before sunset as we were flying over the eastern coast of Canada. 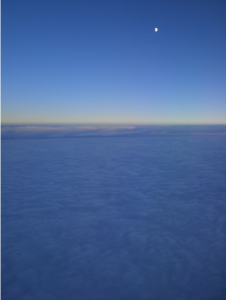 We crossed seven time zones and arrived in Poland on Tuesday morning. That morning we took care of some errands, signed the lease on our apartment, and then I went out to get a few essentials. I really like our apartment. It is quite small but it is very space efficient with lots of cabinets. The fridge is tiny, so I imagine we will be making more frequent, smaller grocery trips. Some things seem very different, but others seem very much the same. Aside from the language it feels like I’m still in an American city in many respects. Some things are quite different. For instance, there are no drinking fountains anywhere. I couldn’t find one in the airport in Germany either, so I guess they must be an American thing or something. My friends here told us to only drink bottled water anyway so I guess it doesn’t matter.
Paul was very excited to get to Poland. Here he is on a quilt his Aunt Miranda made for him, pointing out Poland for us: 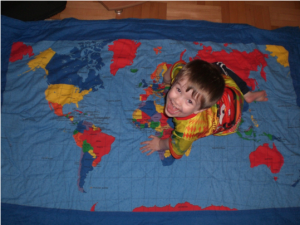 People say that the best way to get over jet lag is to try to stay awake the first day. We tried, but I sat still on our couch a little too long and ended up passing out about 4 pm without meaning to. Annika and I still adjusted pretty fast, but Paul was not amenable to that. People say that young children deal better with jet lag than adults, but I beg to differ. This picture is from Wednesday afternoon. 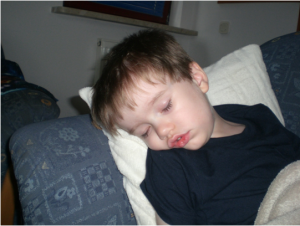 We had decided to let Paul take a short nap and then wake him up so he could theoretically sleep that night. I took this picture right before I tried to wake him up- emphasis on tried. I tickled him, talked to him, poked him, swung him around, and got no response at all. Then I hung him upside down and blew on his neck real loud. That got him to say “Daddy stop” with his eyes still firmly closed. After about ten minutes of trying I eventually gave up. We tried to get his naps shorter a little each day. Yesterday he and I were both starting to get very tired around 6 pm, so we decided to go out shopping for winter clothes to try to keep him awake. No luck there. 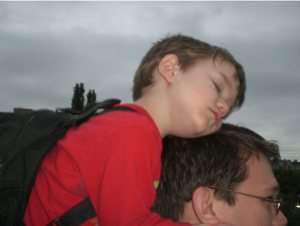 He was too tired to walk, so I put him on my shoulders because I figured it would be harder for him to sleep up there. I tried to wake him up once we got to the store but that child was in deep hibernation. We put him in the cart. 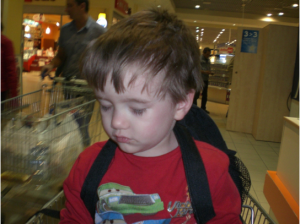 But nothing would stir him. I rode the metro up to downtown Warsaw to go to the Institute of International Relations at the University of Warsaw where I will be studying to take care of some administrative stuff. The city is absolutely huge, and Warsaw is very international. On my way to school I saw a Brazilian storefront a few blocks down. I’m not sure if it’s a restaurant or a market or what but I am excited to see later when I have more time. I still don’t know very much Polish, but I know enough to ask for directions. I stopped a man in the street to ask him where the street the university is on was; I asked him in Polish and he answered “I don’t speak Polish.” I thought it was funny that a man I picked at random turned out to be another foreigner. I didn’t manage to get any really good pictures of downtown. This was the best shot I had. 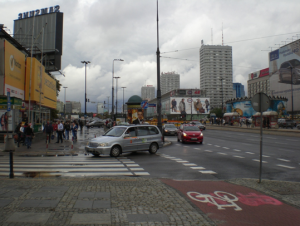 I’m still getting my wires crossed a little bit with too many languages running around in my head. While I was at the mall a man asked me a question in Polish (simple enough that even I could understand it) and without realizing it I answered him in Spanish. It took me a second to realize that his blank stare showed that my brain had jumped linguistic tracks before I was able to correct myself.
Overall the week has been pretty exhausting. Since we don’t have a car and are relying on Warsaw’s excellent public transit system, we’ve been walking a lot more than we’re used to. Maybe Poland can help me trim down a few pounds (err, kilos. Gotta think metric now!). Getting around has been very painless because the transit authority here has an Android application that will figure out your route for you and buzz you when it’s time for you get off the bus/tram/metro. Earlier this week we invited the sister missionaries from our church over for breakfast, partly to get to meet them and partly so we’d have a translator for when the internet installer showed up (which he never did). We had some paperwork issues and we won’t be getting internet until this Tuesday (and dealing with utility customer service in a foreign language is pretty hard) so I’m uploading this through my phone. Hopefully the formatting doesn’t get too screwed up. 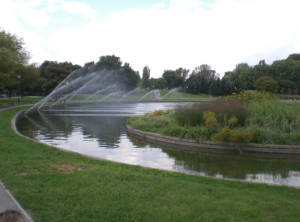 Yesterday I took Paul to the Pole Mokotowskie. It’s a very large park built on what used to be an airfield, with lots of green space, bike trails, a lake and a children’s playground. It’s only two stops away on the Metro so it’s quite convenient. 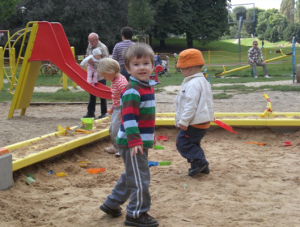 Some things are universal throughout the world. One is that talk radio hosts make people angry. I can’t read all of the sign but the “Idiota” seems pretty self-explanatory. This ad was at the metro station: 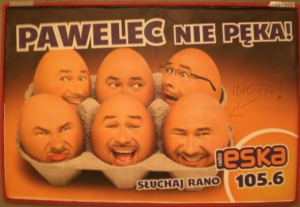 We went to the local branch of our church today. It’s only one stop away on the metro so it’s very easy to get to. The meetings are translated between Polish and English so everyone can easily participate. The elder’s quorum president (a local church leader), President Neto, is from Mozambique, so I was able to talk to him in Portuguese even if my Polish isn’t very good yet! They had a pot luck after the meetings ended so we got to enjoy some good Polish food. The members are very friendly and made us feel welcome from the first moment. Here’s a picture of us with Sister Richards, the branch president’s wife. She and her husband are serving here as missionaries. They are from Las Vegas. 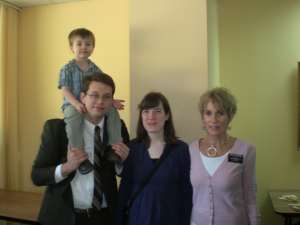 And here’s a shot of us in front of the building where the branch meets: 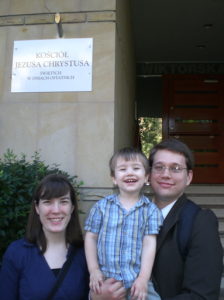 Anyway, that’s all for now. So far we are loving Poland and have felt very welcome here. Next time I should have a better connection so this should be easier.

2 Comments on "Getting to Poland: The First Week"