Well this has been a very interesting week. On Wednesday Fulbright Orientation began in Warsaw. We started at the US Embassy in Warsaw. We have quite an interesting and diverse group of Fulbrighters. There are forty of us. There are a lot of English teaching assistants and people doing research in various fields, such as theatre, music, history, Jewish culture in Poland, among other things. It has been very interesting talking to them about their research plans. Every one of them is very passionate about whatever brought them to Poland.

Unfortunately the Embassy does not allow cameras for security reasons so I have no cool pictures from Wednesday. We got to hear from a lot of Embassy staff that morning and get answers to a lot of our questions. We talked a lot about Polish-US relations. After that meeting we went over to the U.S. Ambassador’s residence to have lunch. That was a very interesting and formal affair. It was a large and beautiful house. The food was excellent, the plates had the american eagle seal on them, and the napkins were red white and blue. It was a very exciting opportunity and I got to meet a lot of interesting people, both in the State Department and Poles returning from Fulbright studies in the United States.

The next day we took a bus from Warsaw to Wroclaw in southwestern Poland near the Czech and German border. I was on my way to the hotel where the Fulbright bus would be departing from when I saw a memorial statue of a soldier that looked very interesting. I was in a bit of a hurry so I didn’t get a chance to look around for too long for a plaque, but I didn’t see one. I’m not entirely sure what the monument is for but I thought it looked cool. 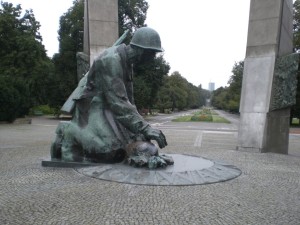 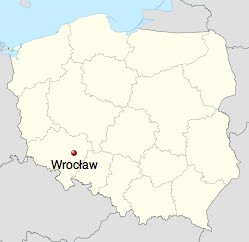 The bus ride helped drive home to me some of the ideas that I have read about, especially about Poland’s lack of natural barriers for invading armies. The land I saw on the way to Wroclaw was very flat and relatively clear the whole way there. Much of the area is forested, but the forests are clear of undergrowth and would be pretty easy to get through in any case. Many of the country homes are very well kept and attractive, with metal and brick fences.

My stay in Wroclaw will be for nine days to complete my Fulbright orientation. Wroclaw feels very different than Warsaw. Warsaw feels very metropolitan. Wroclaw feels much more distinctively European. This city has a very interesting history. It was originally founded in 990, and at various times it has been ruled by different nations (Bohemia, Poland, and Germany are a few examples. More recently it was ruled by Germany until the end of World War II, when the German population was largely evacuated and Wroclaw became a part of Poland once more. Wroclaw is built on a number of islands that are all connected by bridges, leading some to compare it to Venice. 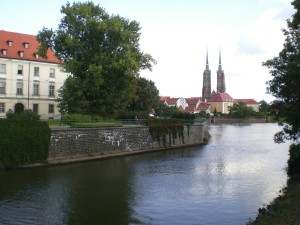 One of these bridges has an interesting tradition. 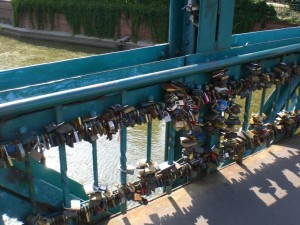 When a couple falls in love here, they write their names on a padlock and lock it to one of the bridges that connect two of the islands. 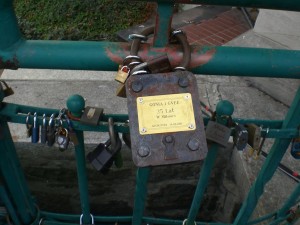 Our orientation classes are being hosted by the University of Wroclaw. The university itself is very beautiful. A lot of it was destroyed during World War II but it has been rebuilt in the same style it had before. The Aula Leopoldina I believe was one of the few areas that survived intact. It is where formal and important meetings are held. 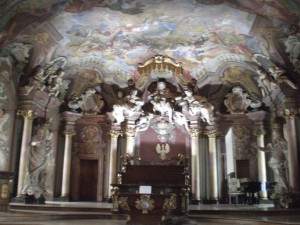 I am amazed by the detail in all the paintings, statues and other decorations on the walls. There is a lot of work in this room: 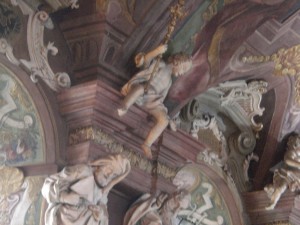 During the week we have lectures on Polish culture, history, and lessons in the Polish language. This weekend we got to tour Lower Silesia and Wroclaw itself. One of our first stops was the Church of Peace in Świdnica. This was a Lutheran church that was permitted to be built in Catholic territory following the Peace of Westphalia. There were a lot of conditions for the Protestants to follow. The church had to be built entirely of wood, it had to be built outside of town, could not have a church bell and had to be completed in a single year. 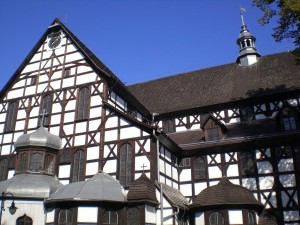 The result was the largest wooden church in Europe. I was amazed that they were able to complete it in a single year. Here are some pictures of the inside (bear in mind, the inside of churches tend to be very dark and I was using a small point and shoot camera with no tripod): 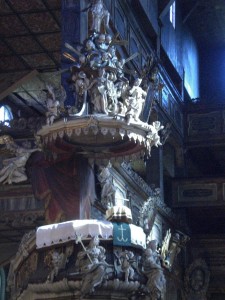 This is the pulpit. 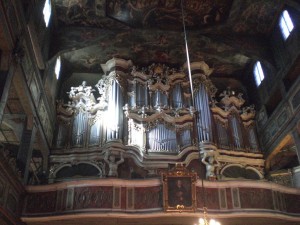 This is the organ. 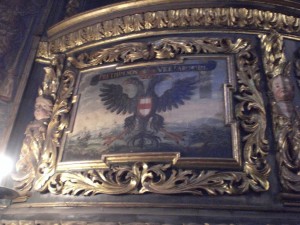 This is an example of the detail work inside. Most of the church is equally detailed. 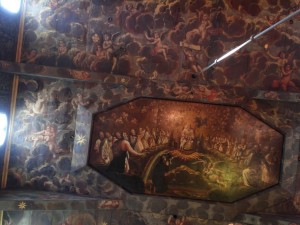 And this is one shot of the ceiling. Incredible that they got it done in a year.

We also got to see a castle near Wroclaw. It looks different than you would expect because it was continuously inhabited until WWII and was renovated from time to time. 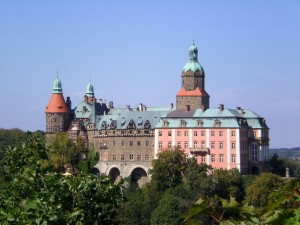 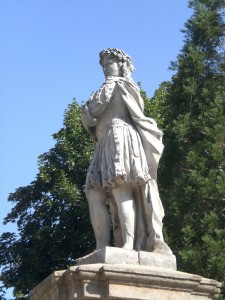 The inside was very elaborate. 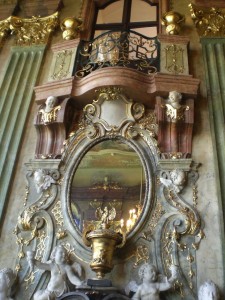 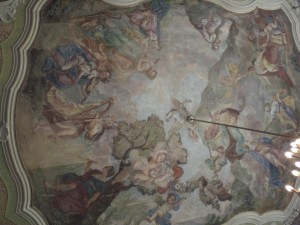 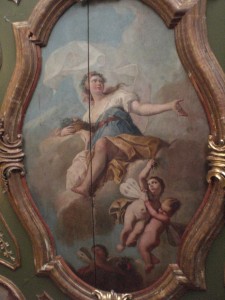 Here’s one of the courtyard: 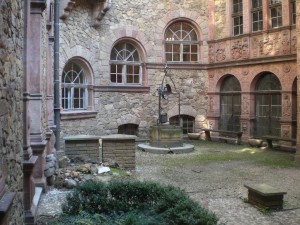 The gardens were equally beautiful: 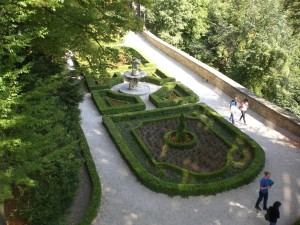 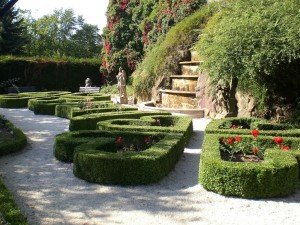 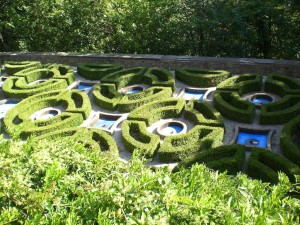 If I remember correctly, the owner of this castle ran afoul of the Nazis when his two sons went to London to join the Allied forces (this area was part of Germany prior to WWII). Hitler recognized the boys on TV and seized the castle and used it as a headquarters for one of his paramilitaries. It was later occupied by Soviet troops and the castle was looted and damaged. It is in the process of being restored.

Here are some shots that look more like what you’d expect at a castle: 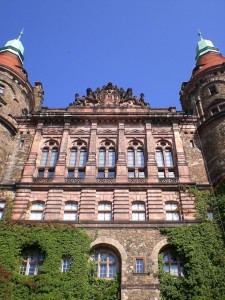 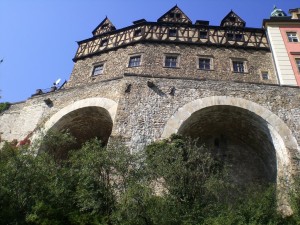 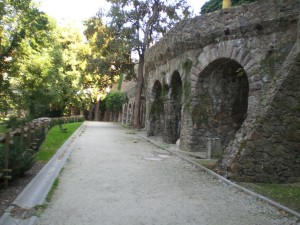 It looks like I’m out of time for now so I will save my other pictures for next week. Wroclaw is an amazing place and I will have to bring Annika and Paul out to see it before we leave the country.