It’s been a great week. The program in Wroclaw included Polish language classes and lectures on Polish history, sociology and art. I had an amazing Polish teacher who was always so enthusiastic and excited. It made Polish seem less intimidating.

In every language there are words that have nothing to do with each other in terms of meaning but still sound similar. Polish is no exception. We were learning food words so we could go shopping. I was trying to say dziczyzna (venison) but instead I said dziewczyna (girl). It’s probably not a good idea to ask for that at a butcher store; it might give Poles the wrong impression of America. At least I made that mistake in a classroom ;).

We were very well fed in Wroclaw. We had soup every day before a very nice midday meal. Polish food makes heavy use of vegetables and they are able to make them very tasty. Here in Poland (like in Brazil and much of Latin America), the midday meal is the main meal of the day. The evening meal is usually fairly light. One other nice thing is that Poles believe in second breakfast, so I get to feel like a hobbit! 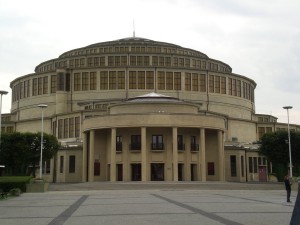 This is where the meeting of EU finance ministers was held in Wroclaw while I was there. The building was all locked down so we couldn’t go inside. I believe Geithner, the US Treasury secretary, was also present. 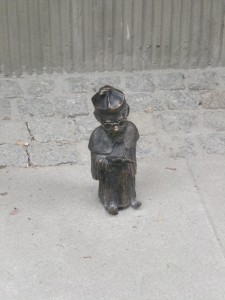 Wroclaw loves its dwarves. There are small statues like this all over the city, tied to the theme of whatever is nearby. This one above is from the archives. 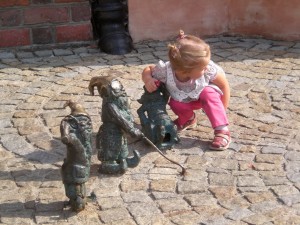 And here a little girl is looking at the dwarves in the main square.

Only in Europe do you see a lancer hanging out in front of a mall. This is Peregrine, of Wroclaw, who quoted his grandfather as saying “better at home bread and cumin than elsewhere a plump chicken.”

These two pictures are a view of Wroclaw from the top of the mathematics tower: 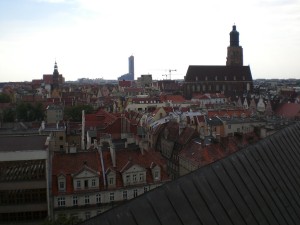 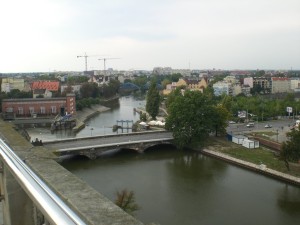 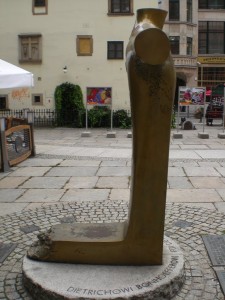 This is a picture of the monument to Dietrich Bonhoeffer, a German minister who resisted the Nazis, and ultimately was executed by the SS. He was a resident of Wroclaw and a very brave man. The picture below is a bust of him in Wroclaw in one of the city buildings: 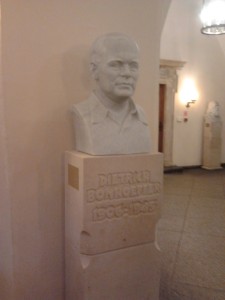 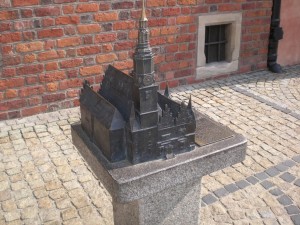 This picture shows how Wroclaw tries to accommodate blind tourists. Here is a model of the building that they can feel and a description of its history in braille. There were many of these models in Wroclaw. 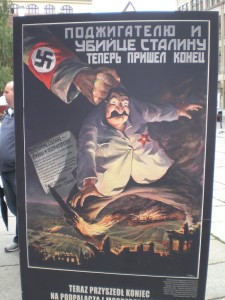 This is a Nazi propaganda poster on display at a historical monument in Wroclaw, saying something about how Stalin the arsonist is going to die (I don’t remember the exact words- the translation didn’t make it into the picture). I assume that the arson comment was referencing the Reichstag fire but I’m not certain. I’ve always found propaganda images interesting. 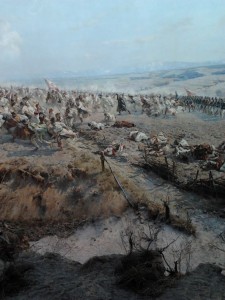 This picture is from the Panorama Raclawicka. It’s a huge panoramic painting of an important battle in Polish history in 1794. During an insurrection against the Russians, the Polish were able to defeat the Russian army on this battlefield. It was an important symbolic victory, although the insurrection ultimately failed. What I loved about this place is that the panorama is surrounded by a three dimensional set with real dirt, plants, swords, carts, etc. It makes it hard to tell exactly where the painting ends and reality begins. Very cool effect. 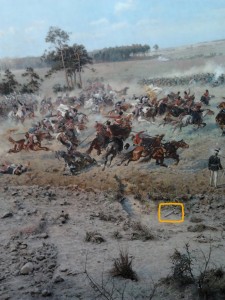 Here I’ve marked where a sword is laying in the dirt in front of the painting. 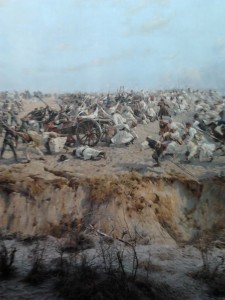 In this part of the painting peasants with scythes are attacking Russian artillery. 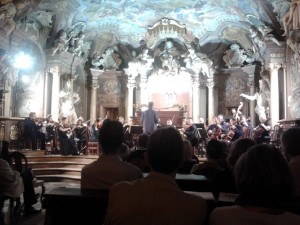 The last thing I did in Wroclaw was attend a string chamber concert. It was put on by the Wroclaw Philharmonic at the Aula Leopoldina (the beautiful hall at the university I posted pictures of last week). Listening to beautiful classical music while admiring elaborate frescos, paintings and sculptures was amazing. The acoustics of that room are great.

All in all, I loved my time in Wroclaw, but I am very grateful to be back in Warsaw with the family.