Annika had an OB appointment recently, but Paul tends to get bored at the doctor’s office. One thing that really keeps him occupied is getting his picture taken. Thank goodness for smartphones. 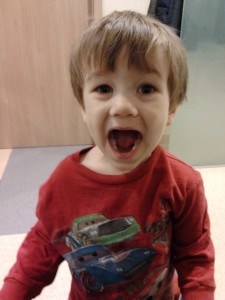 Thursday I took Paul to a different playground, called Ogród Jordanowski. This one has way more playground equipment than the one we went to before, and its much closer to our apartment, close enough that its pretty much a toss up between whether to walk or take the bus. 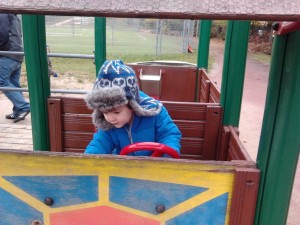 Of course Paul went straight to the steering wheel.

Friday night there was a potluck for all of the Warsaw Fulbrighters. Not everyone was able to make it but it was a great evening. 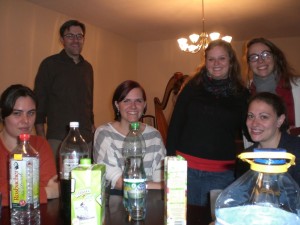 These are some of my Fulbright colleagues. The man in the back, Nathan Wood, is a history professor from the University of Kansas. He was hosting the event. His wife Erin (not in the picture) played her harp for us. It was beautiful.

The shortest route to a happy Paul is to feed him pancakes- and he enjoys watching Mommy make them almost as much as eating them. 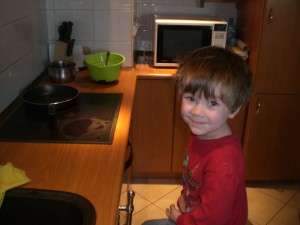 Here he is all situated and ready for them to hit the pan!

Saturday I got a chance to play Pathfinder with a group of expatriates from the Netherlands, Greece, Italy and Canada. That was a lot of fun and I made some new friends. From what I’ve seen so far I like it a lot better than the other versions of D&D I’ve played before.

Sunday I gave a sermon at my church about how important it is for us to share the gospel so that others can enjoy the full blessings of the Atonement of Christ. I gave it in English, and one of the missionaries translated it into Polish for me. At the end I gave my testimony in Polish. Afterwards someone told me that I don’t have an American accent; apparently I sound like a Spaniard trying to speak Polish ;).

It still takes me a minute to switch linguistic tracks. One of the members of my congregation is from Mozambique, and although he speaks good English, we always speak Portuguese (because we can). He came up and said something to me in Portuguese, and then I was about to answer in Polish. I caught myself, but it still took a second to force my brain back to Portuguese. All in all it was another great week to be in Poland.

2 Comments on "Smartphones, Fulbrighters and a Sermon"