Something I forgot to put on last week’s entry was about this film: 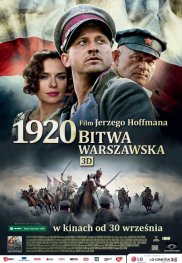 I saw 1920: Bitwa Warszawska (The Battle of Warsaw) on the 6th of October at the Kino Femina. They had a special screening with English subtitles so I took advantage of it. I ran into a man from the embassy staff (I had met him at the Ambassador’s residence) at the screening. Small world. The movie theater had assigned seating. I’m told that’s common in both Poland and Russia. It seemed to overuse slow motion effects but overall I thought it was very interesting. The movie is about the Polish-Soviet War. This war ended in a Polish victory that prevented the Red Army from overrunning Europe for twenty years. I thought it used the 3d medium quite well, and the acting and costumes were very good. I was expecting it to be a vehemently anti-Russian film, but the makers of the movie went out of their way to include some sympathetic Russian Cossacks that were also fighting the Communists. Overall, I enjoyed it and thought it was very well done.

This week we had a few more new arrivals to my graduate program, from the Ukraine, Lithuania, Moldova, Laos, and Russia, giving us an even more diverse group of students.

The pleasantly warm fall weather seems to be ending, and winter is definitely on the way. It was good we had already gotten ourselves equipped for the cold. Here we are on the way to church this morning, waiting for the tram: 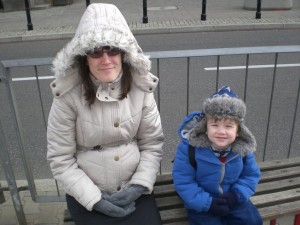 We were a little late getting out. Getting Paul all layered up takes longer than we are used to, and district conference is on the north side of the city, much further than where we usually go. I got to sing in the choir today. It was a great meeting.

On Saturday morning, my friend Doug Pew and I took the young men from our church out to see Old Town Warsaw. It was a little cold to be out playing the tourist, but we had a good time anyway. 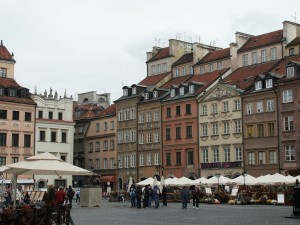 This is a shot of a big square in Old Town. Old Town was completely destroyed by the Germans after the Warsaw Uprising, and was completely rebuilt after the war to look as much like it did before as possible. I think they did a pretty good job. They reused as many of the bricks from the rubble as they could. 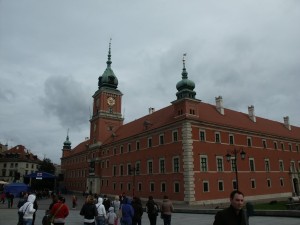 This is the Royal Castle, where the Polish kings lived. 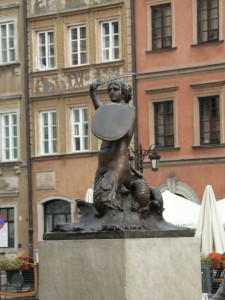 This is a statue of a mermaid in the market square. The mermaid is a symbol of Warsaw, and this statue is from 1855. 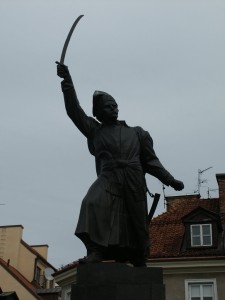 This is a monument to Jan Kiliński, a leader of a failed insurrection in 1794 against the Prussians and Russians during the second partition of Poland. 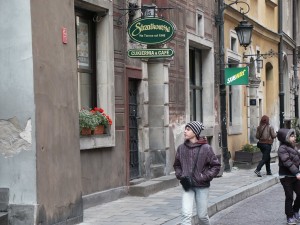 Globalization is alive and well in Warsaw. In the midst of this historic district you can enjoy a Subway sandwich. 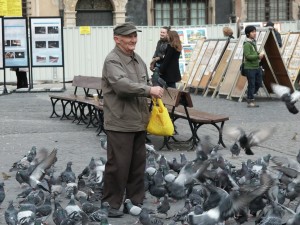 In the square, there was an old man feeding the birds. These birds have no fear of people at all, as you can see.

But what was really cool was when he would throw his bread into the air, and all the birds would fly off at once: 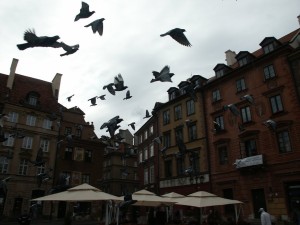 And here he threw the bread in my direction: 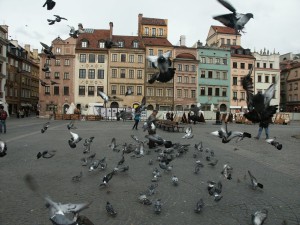 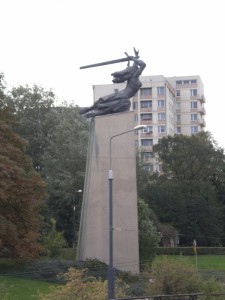 This is a statue of Nike, erected as a monument to the World War II heroes of Poland. It is on Solidarity Avenue near Old Town.

I wish I had had more time to actually go into some of the museums, but we got started a little late. I will have to return when I can take my time to see the inside of more of these places. This week I met a Polish teacher who wants to learn English, so we are trading language lessons. It’s a little painful trying to communicate but I’m sure it will help me. Between that, my private lessons, my Polonicum class, Pimsleur and Rosetta Stone I hope I can pick the language up quickly. I’m trying to have as many different tools available as possible. I am convinced that there is no one magic bullet to master a language, but that a variety of tools taken together is much more effective.

2 Comments on "A brief visit to Old Town"