Monday was my first day of classes. I had some delays being able to register for my Polish classes at the university, and by the time I could register the courses were all full. I was stubborn and went to a class anyway, and eventually was able to snipe a spot right after someone dropped. My professors are all excellent. The students in my master’s program are very diverse. This semester I have both Polish and American professors. One of my professors works at the Ministry of Labor here and is very involved in EU affairs during Poland’s term of presidency of the EU. My classmates are from China, India, Serbia, France, Argentina, Turkey and Poland. I am the only American in the first year of the program. I am sure I will enjoy getting a very different perspective on foreign affairs. Some of my classmates studied in the UK so although they are not British they sound like it. It’s a great group and I look forward to getting to know them better.

So on to the pictures for this week: 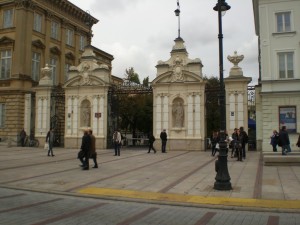 This is the main entrance for the University of Warsaw main campus. The only class I have here is my Polish class. There are actually quite a few campuses. One of the professors from my program said that there are multiple campuses scattered through the city because the communist authorities decentralized the university after a bunch of student protests in the 1960s to make it harder for them to organize such activity in the future. The various faculties are a lot more autonomous than their counterparts at US universities. 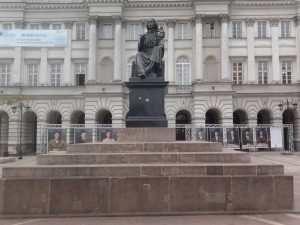 This is a monument to Copernicus, a famous Polish astronomer. If the name doesn’t ring a bell, he was the scientist who first proposed that the Earth orbited the sun instead of the other way around. The monument is just outside the main campus. 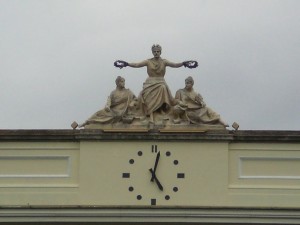 This is the statue on the top of the old library. I love these little details everywhere. 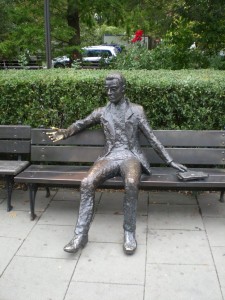 This statue is supposed to bring luck to students and help them to pass their exams. His hand is pretty worn from lots of hopeful students shaking it. 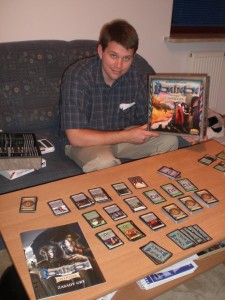 All work and no play makes Ryan a hard man to live with. We found a board game store with a great selection, so we picked up a copy of Dominion: Intrigue in Polish. We are familiar with the original game Dominion but this version was new to us. It helps teach new Polish vocabulary and is a great way to relax with my wife and friends.

Paul (my three-year-old son) started his studies this week too. Annika is teaching him to read, memorize poems, and math. He is a very enthusiastic learner. I read him scripture stories in Polish every night as well. Paul still seems to think that Poland is our apartment for some reason. I’ve been trying to explain that the apartment is in Poland but isn’t Poland itself, but that’s a little too abstract for a 3-year-old.

We’ve been trying to assimilate a little by cooking Polish food as well. Poles love to have soup frequently, so I made a huge batch of barszcz on Saturday from fresh beets. It’s good food and also very inexpensive to make (although if you’re not careful it can be very messy), and having a lot of it made up ahead of time makes eating during the week a lot more convenient.

Annika and I also started some private Polish lessons this week to try to help us master the grammar. We are both determined to learn the language as quickly as possible. All in all, it’s been a very busy and hectic week, but an enjoyable one.

Be the first to comment on "The semester begins"