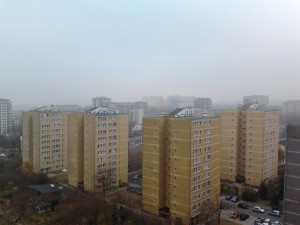 We live on the first floor of our building (effectively three stories up over a business) so our view isn’t that great. This week I went up to the top of our building to take some pictures so you can see the area in which we live. 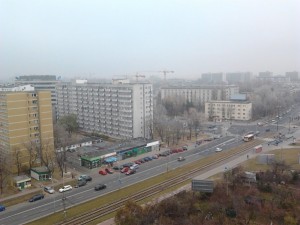 You can see a little greenspace in both these pictures. Right in the middle of the city, there is an area set aside for small private garden plots. This is a common practice here. This next shot is from the top of my building looking down at the plot next to us: 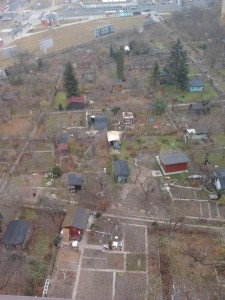 On Monday the Fulbright Commission sponsored an Education USA event: 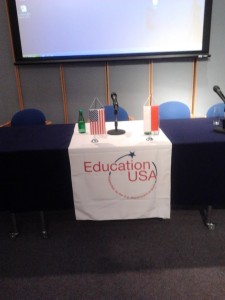 I got to meet some interesting professors, and then I was on a panel with other Fulbrighters to answer questions about American universities from Polish students considering study abroad. An enjoyable time with some great catered Polish food.

On Wednesday, Dr. Benjamin Barber, an American political theorist and Harvard PhD, came to give a lecture hosted by the Faculty of Political Science and Journalism at the University of Warsaw. The lecture was called “The Power of Money and the Crisis in Democracy: From Greece to the Occupy Wall.” It was a very interesting lecture, and at the end he took time for questions. He had talked a lot about the economic crisis of the United States, and so I asked him if he thought we should have let the banks that had made irresponsible decisions fail so that the banks that had been more conservative in their lending practices could take a greater market share and the bad banks be forced out of the business.

His response was very interesting. He commented on how some of the banks were so big that if they were to fail, there would be systemic consequences (an argument I’ve heard many times before). But then he said something I did not expect. “You’ve heard of the expression, ‘too big to fail.’ Well if a business is too big to fail, it is too big to exist.” His point was that regulators should be more aggressive in preventing such businesses from getting so big in the first place, so that the competitive market can do its job to ensure efficiency without the systemic issues we had discussed. 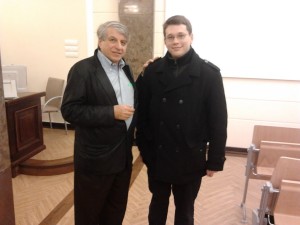 After the lecture, I got to ask him some additional questions. It was great to get to meet him. Some of his writings have been required reading in a lot of my courses and he is a gifted speaker.

Lately it’s been a little too cold for me to feel very much like taking Paul out to the playground, and when he goes too long without getting out he gets a little stir crazy in our small apartment. 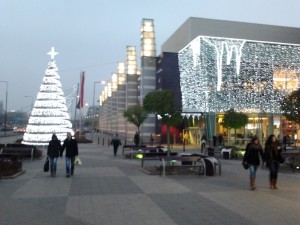 Lucky for us the Galeria Mokotów is heated. I took Paul with me and let him wander, staring at the animals at the pet store and the fountain. That seemed to give him some sanity back. 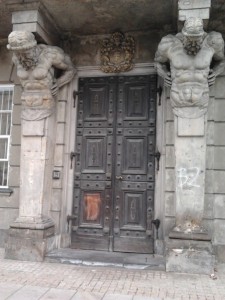 My Polish professor recently told me that the building that we’ve been meeting in is a former nobleman’s palace. This photo above is a shot of the entrance. Lots of detailed carvings are in the woodwork inside as well.

Saturday morning I went with some members of my church to help on a service project. The home of an older man in our congregation had been severely damaged by fire. The building was originally a small factory for airplane parts that had been built in the 1920s. Our job was to remove what was left of the previous roof and get the new roof frame into place. 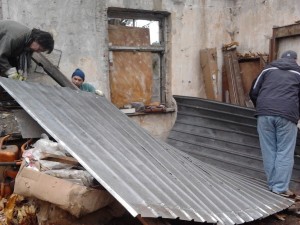 This picture is of Brother Leitner, the man we were helping, hanging from one of the very heavy frames: 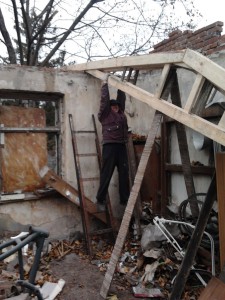 It was very hard work and my muscles have yet to forgive me for putting them through it. Still, it was a great opportunity for Christlike service to our fellow man. I believe we are all created in the image of God, and when we seek opportunities to serve other people, we are forming our character in the image of God as well. We got all the frames up to the top of the building and we are hoping to finish the rest of the roof this coming week.