I recently presented this paper at a Fulbright conference. Below is the final version that I used to make my presentation.
Introduction
Structural functionalism is an approach to studying comparative politics. It seeks to analyze both the actual structures of political institutions and the functions that these institutions carry out. While institutional structures vary from country to country, the same basic political functions occur in all states. Additionally, states with similar structures may still operate very differently because their institutions perform different functions. This paper will analyze the regime of the Republic of Poland using the structural functionalism model.[1]
Political Structures
The Republic of Poland is classified as a parliamentary republic.[2] Its constitutional structure is based at least in part on the German model.[3] It has a bicameral national legislature called the National Assembly. The lower house, the Sejm, has 460 members that are elected by party list proportional representation every four years. A party must gain at least five percent of the national vote to receive any seats.[4] Ethnic minority parties are an exception to the five percent rule.[5]

The upper house is called the Senate and has 100 members.[6] Senators are directly elected in single-member electoral districts every four years.[7] The Sejm can vote to dissolve the parliament with a two-thirds vote, which forces new elections for both houses.[8]  The Sejm is much more powerful than the Senate. The Senate can veto legislation but the veto can be overturned by a simple majority vote in the Sejm.[9]

Poland has a dual executive system with power shared between a prime minister and president. The prime minister serves as head of government, and the president serves as the head of state. The prime minister is selected by a vote in the Sejm, and then forms a government. The Sejm can remove the prime minister by a constructive no-confidence vote (as in Germany); this means that not only does a majority of the Sejm have to agree to remove a prime minister, but they have to also agree on a successor for the vote to be successful. Because of this, prime ministers are rarely removed by this method. The Sejm can also use no confidence votes to remove individual ministers from the government, even when it cannot muster the support to topple the government entirely. [10]
The president of Poland is directly elected by a national election and has meaningful powers. He can nominate the prime minister.[11] He can veto legislation, which can only be overturned by a three-fifths vote of the legislature. He can send legislation to the Constitutional Tribunal, the supreme court of Poland, and force a ruling on the legislation’s constitutionality.[12]He also has a strong role in foreign policy[13]and serves as the commander in chief of the armed forces and appoints many important officials.[14]The president can call new elections of parliament if it fails to pass a budget within four months of submitting a draft budget[15]or if the Sejm is unable to select a prime minister.[16]
Although the President does have meaningful powers, the prime minister is still the more powerful of the two offices because he is generally the head of the party controlling the Sejm. The prime minister’s role as head of government gives him greater influence in national politics.[17]
Political Parties
Poland has had an extremely unstable party system since the transition from communism. Many parties have come and gone: “The three parties that fared best in the September 2005 elections—Law and Justice, Civic Platform, and Self-Defense—had entered the Sejm for the first time only in 2001… [The] accompanying prime ministerial turnover is exceptional.”[18]Throughout Eastern Europe, incumbent parties have done poorly in most elections.[19]Additionally, because the electoral system of the Sejm uses proportional representation with medium-sized districts, one-party majorities are very difficult to achieve[20]and coalition government is the norm.
The most recent parliamentary election in Poland was held on October 9, 2011. The following charts show the election results and the current composition of the Polish legislature: 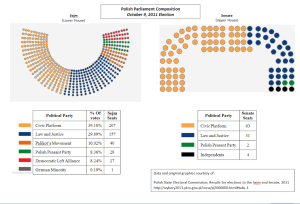