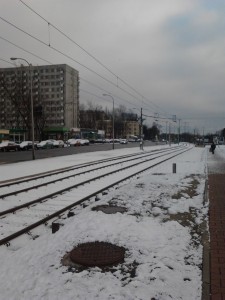 Unfortunately after a week of nice snow it started warming up just enough to turn it all to a slushy mess.

It’s been a busy three weeks since I last posted. I chartered the first Varsity Scout team in Poland back in December so our branch’s young men could still advance in Scouting while abroad. We had our first official campout January 6th.

We must have been seriously jinxed. We were leaving fairly early in the morning so we wouldn’t have to set up camp in the dark (the sun was setting at like 330 pm or so). We had gotten just enough snow that morning to make the Armstrong’s stairs quite slippery, something I discovered when said stairs brutally ambushed my back. It provided some entertainment for Jake, who was right behind me when I fell. Concrete stairs don’t have very good lumbar support.

We drove out to our campsite, which was a wooded fenced lot about an hour from the city owned by Dominik’s family. Upon arrival, Dominik’s key broke in the lock, so instead of driving in, we had to hop the fence with all our gear.

Eventually we got there. 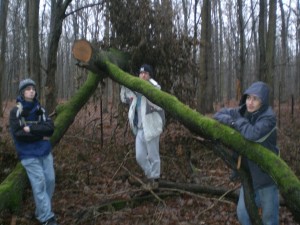 It was a very nice area to camp. Unfortunately it took me absolutely forever to get the fire started. Maybe I’m just a little rusty since my days of winter camping in the Sierra Nevada mountains.

Once we got it going, though, we were in business. You can’t find marshmallows easily here in Poland, so s’mores aren’t really an option. 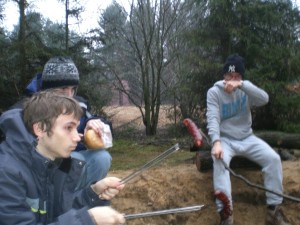 However, kielbasa is something that is very easy to find. We roasted four different kinds and ate pretty well.

Every Scout knows that the real reason we go on campouts is so we have a good excuse to play with fire, right? 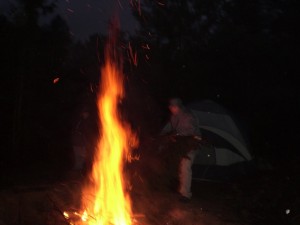 The bigger the better. There was a lot of brush laying around that gave us some nice big flames.

After the sun went down we had a great time playing some wilderness games until it really got cold. About an hour after we went to bed, Dominik got really sick and we ended up having to break camp in the dark, get everything back over the fence and get everyone home.

Hopefully our next campout will go a little smoother. We still had a great time, all things considered.

On the 13th Annika and I celebrated our fifth wedding anniversary. I guess she hasn’t gotten tired of me yet ;). It’s hard to believe I’ve been married for five years. We went to the Magiel Cafe in Mokotów to celebrate. We got to try some rabbit and carp. It turns out that Little Bunny Foo Foo is very tasty in a good mustard sauce!

Later that evening some of the ladies from church set up a baby shower for us. 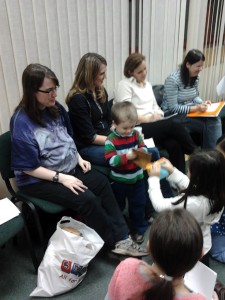 Paul got to help open stuff so he was a happy camper. We are very grateful for their generosity. We’re a lot better equipped for the baby now that may come any day. 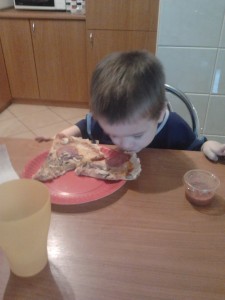 On a slightly more random note, Paul has decided that the crust is the best part of the pizza, and has started eating his crust first. I guess there’s no wrong way to eat a pizza ;).

As for me, I’m halfway through finals and trying very hard to see the light at the end of the tunnel. Almost done with the first semester of grad school; it has certainly flown by. Hopefully the baby will be accommodating and wait until my exams are done before he comes into the world.